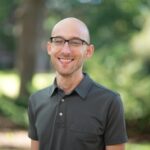 Marc Arthur is an artist and scholar who studies political encounters around around the AIDS pandemic through applied and theoretical methods that highlight topics relating to identity, gender, race, and science. He is Assistant Professor in the Department of Theatre + Dance at Wayne State University in Detroit, Michigan. He completed his PhD in Performance Studies from New York University (2019) and was a Postdoctoral Fellow in Arts-based Social Justice Research and Practice at the University of Michigan (2019 – 2022) where he studied community-based theatre approaches for decreasing stigma and oppression. He is currently working on his first book project entitled, An Imagined Virus: Theatre, Memory, and the Politics of AIDS, which animates the ongoing history of the AIDS through dramaturgies of transformation and new forms of biomedical embodiment.

His writing and criticism has appeared in edited volumes and journals including Theatre Journal, TDR: The Drama Review, Bomb Magazine, and Canadian Theatre Review, as well as numerous edited collections. He has also written extensively for Performa Magazine, where he was editor (2015 – 2017). At Performa he also served as the Head of Research and Archives (2011 – 2017) where he organized touring exhibitions, curated programs, led interdisciplinary research projects with a wide range of artists, and spearheaded the acquisition of the Performa collection by NYU’s Fales Library.

Cover photo by James Emmerman from Mascot (2013), at the Martha Graham Dance Theater